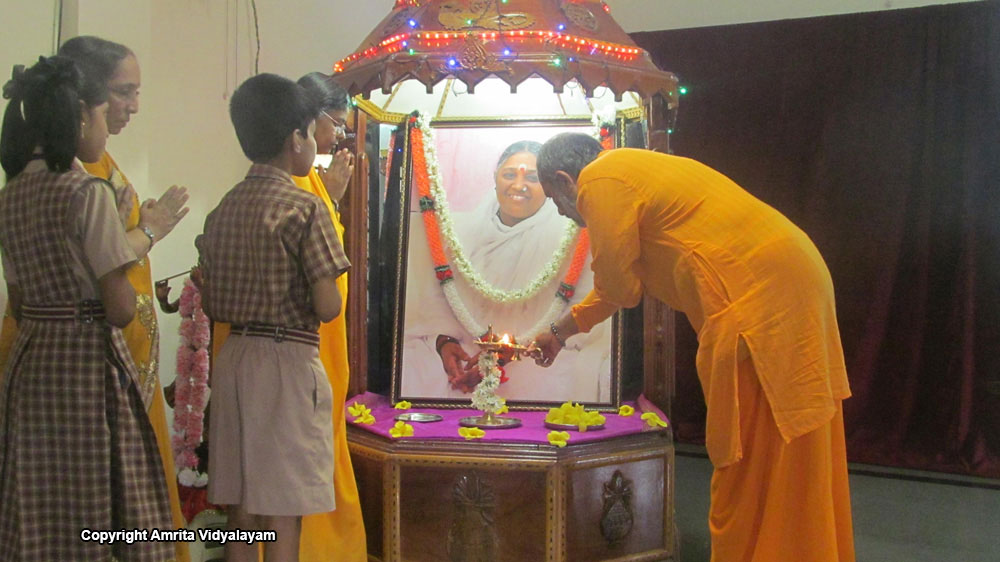 On June 28th and 29th, 2019, sessions were held by Bri. Yogamrita Chaitanyaji for students of Pre-KG to Class X to familiarize them with the emerging ideas and trends on how to develop one’s personality in the 21st century. It was also meant to improve the mental capacity of the students and make them aware of their own potential.

The programme began with the lighting of the lamp before Poojya Amma. Students were divided class-wise and asked to attend the sessions in a particular order. Yogamrita Swamiji started off with games and fun to get the students interested in the session. He conducted a psychological test to make them aware of their own abilities, and also asked them to study based on those capabilities. Swamiji arranged a “Quick Talk Session” for Class X where topics were given on the spot and children were asked to speak on them in order to develop their confidence.

Swamiji spoke about desires, dreams, passions and motivations. Students were told how important their dreams and desires are for developing their personality. He also suggested some beneficial courses the children could pursue after Class XII. Tips regarding stress management were shared by Swamiji, and Life Skills analysis through real life examples were dealt with as well.

The younger children were guided to dance to the music of bhajans and inspired with interesting stories narrated by Swamiji. Children enjoyed the sessions a lot, and gained a lot of knowledge to enrich their lives.

During the second half of the 2nd day of the session, teachers were taken under the gracious shelter of Swamiji’s umbrella of knowledge. Psychological tests were conducted to determine their emotional nature, intelligence, mind-set, level of optimism, etc.

Overall, it was a very effective session. The feedback of students was very positive, and they gained a lot of insight on how to set and achieve goals. Students as well as teachers were inspired and encouraged by Swamiji’s visit.