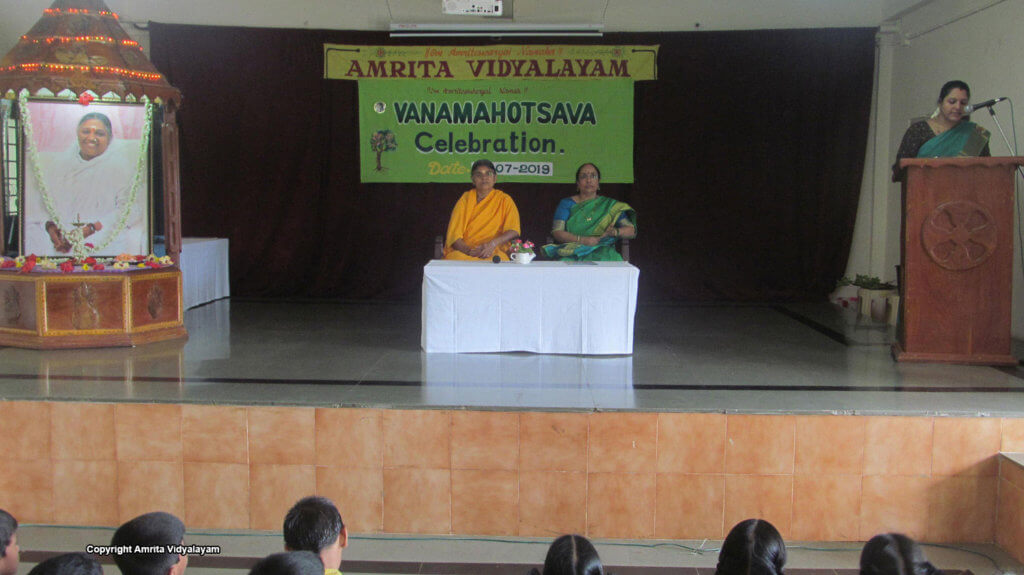 Vana Mahotsava is an annual tree planting festival started in 1950 by K.M. Munshi, the then Union Minister for Agriculture. The purpose of Vana Mahotsava is to create awareness about the conservation of forests and the need to plant new trees.

We celebrated Vana Mahotsava at our school on July 6, 2019. The programme began with the lighting of the holy lamp. Principal Amma and Headmistress planted a sacred Tulsi sapling as an initiation for Vana Mahotsava. Sachi S. Sail of Std. VI spoke about the significance of the celebration, and the Headmistress delivered a speech generating awareness about the environment; students were asked to join hands in the effort to conserve Nature. Principal Amma addressed the students saying that saving the environment is the duty of each and every person on this Earth. Students also planted some saplings on the school premises on this occasion.

In addition to Vana Mahotsava, Investiture Ceremony was also conducted for the elected leaders for the academic year 2019-20. The ceremony was held with great pomp and dignity.

Investiture Ceremony signifies the faith and confidence of the school in the chosen office bearers. The School Captain, Vice-captain, leaders and vice- leaders of the four Houses – Amritamayi, Anandamayi, Chinmayi and Jyotirmayi – were conferred with sashes and honoured by Principal Amma, Headmistress and senior teachers of the school. Later, Headmistress administered the oath to all the leaders, and the school parliament was formed with a cabinet consisting of Chief Minister, Deputy Chief Minister, Minister for Discipline, Sanitation Minister, Tourism Minister and Minister for Cultural Activities. The programme concluded with vote of thanks.

All the teaching and non-teaching staff witnessed the programme, making it a grand success. The Master of Ceremony for the programme was Mrs. Pallavi Naik.

Your application has been successfully submitted. Thank you for applying to Amrita Vidyalayam, Karwar.

Our administrative executive will contact you back at the earliest.